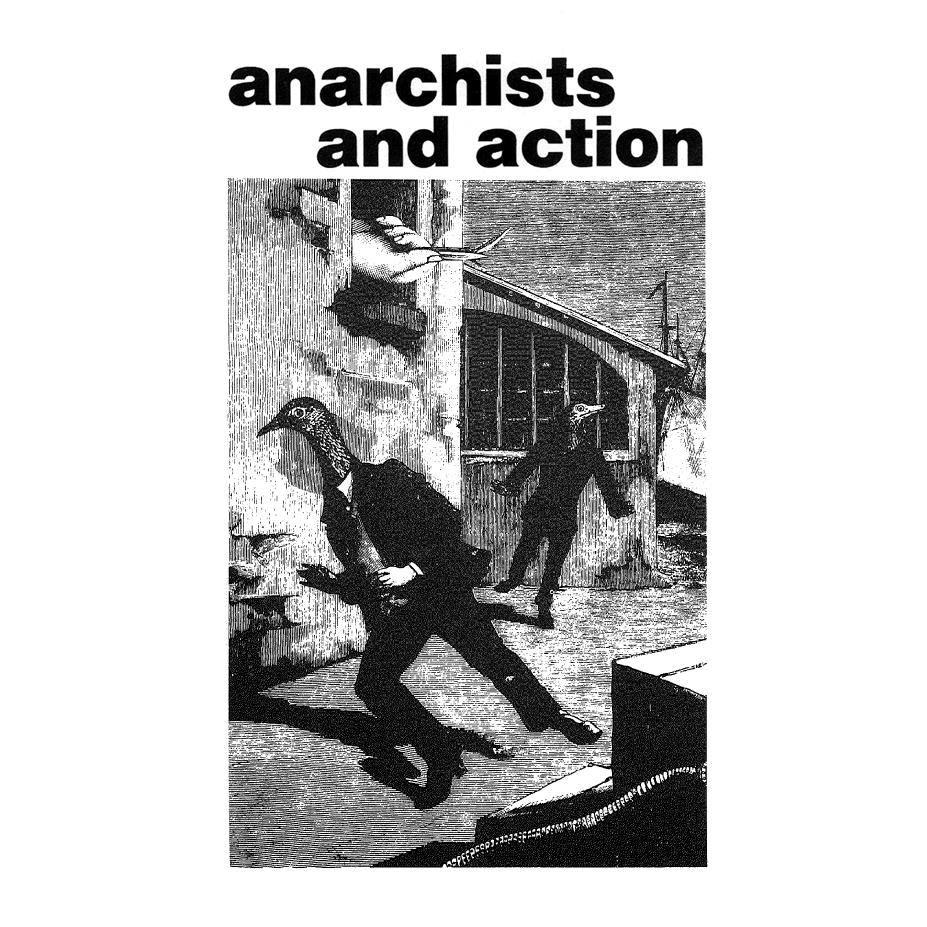 Anarchists are not slaves to numbers but continue to act against power even when the class clash is at a low level in the mass. Anarchist action should not therefore aim at organising and defending the whole of the class of the exploited in one vast organisation to see the struggle from beginning to end, but should identify single aspects of the struggle and carry them through to their conclusion of attack.

If anarchists have one constant characteristic it is that of not letting themselves be discouraged by the adversities of the class struggle or to be enticed by the promises of power.

It will always be difficult, often impossible, to find an anarchist comrade who has given in to power. This might happen as a result of torture or physical pain, never by long spells of repression or loss of heart. There is something in anarchists that prevents them from becoming discouraged, something that makes them optimistic even in the worst moments of their history. It makes them look forward to possible future outlets in the struggle, not backwards to past mistakes.

An anarchist’s revolutionary work is never exclusively aimed at mass mobilisation therefore, otherwise the use of certain methods would become subject to the conditions present within the latter at a given time. The active anarchist minority is not a mere slave to numbers but acts on reality using its own ideas and actions. There is obviously a relationship between these ideas and the growth in organisation, but the one does not come about as a direct result of the other.

The relationship with the mass cannot be structured as something that must endure the passage of time, i.e. be based on growth to infinity and resistance against the attack of the exploiters. It must have a more reduced specific dimension, one that is decidedly that of attack and not a rearguard relationship.

The organisational structures we can offer are limited in time and space. They are simple associative forms to be reached in the short term, in other words, their aim is not that of organising and defending the whole of the exploited class in one vast organisation to take them through the struggle from beginning to end. They must have a more reduced dimension, identifying one aspect of the struggle and carrying it through to its conclusion of attack. They should not be weighed down by ideology but contain basic elements that can be shared by all: self-management of the struggle, permanent conflictuality, attack on the class enemy.

At least two factors point to this road for the relationship between anarchist minority and mass: the class sectorialism produced by capital, and the spreading feeling of impotence that the individual gets from certain forms of collective struggle.

There exists a strong desire to struggle against exploitation, and there are still spaces where this struggle can be expressed concretely. Models of action are being worked out in practice, and there is still a lot to be done in this direction.

Small actions are always criticised for being insignificant and ridiculous against such an immense structure as that of capitalist power. But it would be a mistake to attempt to remedy this by opposing them with a relationship based on quantity rather than extending these small actions, which are easy for others to repeat. The clash is significant precisely because of the enemy’s great complexity which it modifies constantly in order to maintain consensus. This consensus depends on a fine network of social relations functioning at all levels. The smallest disturbance damages it far beyond the limits of the action itself. It damages its image, its programme, the mechanisms that produce social peace and the unstable equilibrium of politics.

Each tiny action that comes from even a very small number of comrades, is in fact a great act of subversion. It goes far beyond the often microscopic dimensions of what took place, becoming not so much a symbol as a point of reference.

This is the sense in which we have often spoken of insurrection. We can start building our struggle in such a way that conditions of revolt can emerge and latent conflict can develop and be brought to the fore. In this way a contact is established between the anarchist minority and the specific situation where the struggle can be developed.

We know that many comrades do not share these ideas. Some-accuse us of being analytically out of date, others of not seeing that circumscribed struggle only serve the aims of power, arguing that, especially now in the electronic era, it is no longer possible to talk of revolt.

But we are stubborn. We believe it is still possible to rebel today, even in the computer era.

It is still possible to penetrate the monster with a pinprick. But we must move away from the stereotypical images of the great mass struggles, and the concept of the infinite growth of a movement that is to dominate and control everything. We must develop a more precise and detailed way of thinking. We must consider reality for what it is, not what we imagine it to be. When faced with a situation we must have a clear idea of the reality that surrounds us, the class clash that such a reality reflects, and provide ourselves with the necessary means in order to act on it.

As anarchists we have models of intervention and ideas that are of great importance and revolutionary significance, but they do not speak for themselves. They are not immediately comprehensible, so we must put them into action, it is not enough to simply explain them.

The very effort of providing ourselves with the means required for the struggle should help to clarify our ideas, both for ourselves and for those who come in to contact with us. A reduced idea of these means, one that limits itself to simply counter-information, dissent and declarations of principle, is clearly inadequate. We must go beyond that and work in three directions: contact with the mass (with clarity and circumscribed to the precise requirements of the struggle); action within the revolutionary movement (in the subjective sense already mentioned); construction of the specific organisation (functional to both work within the mass and to action within the revolutionary movement).

And we need to work very hard in this direction.