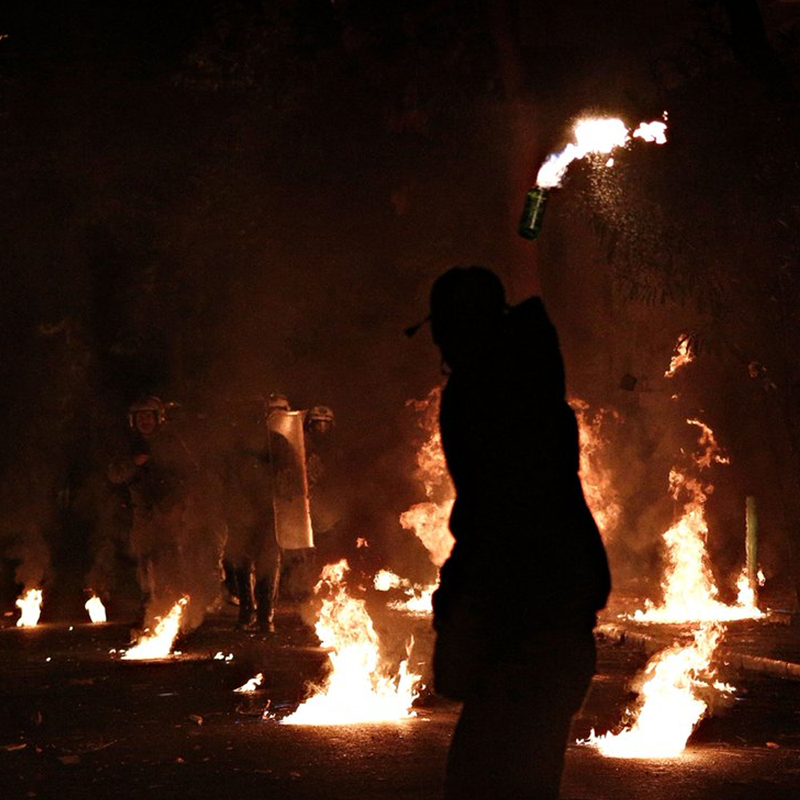 Libertarian communism is also known, particularly in Latin countries, by the name of “anarchist communism.” It is not. On the contrary, the two words are a contradiction in terms.

Communism signifies a social condition in which the means of production and all material goods belong to the mass of the people who identify themselves with the totality or majority of society. Everyone has their goods disposed of according to the way decided by those who govern and whose law all must obey.

Anarchy signifies the absence of government: that is to say, a state of things in which the individual is not held in obedience to anyone, lives as he pleases, and is limited only by the extent of his power. He uses moral and material goods in the particular manner he prefers without having to get the approval of his fellows.

One hypothesis has it that the universal realization of anarchy would return man to nature. It would create an equilibrium- however unstable – between individuals who- urged on by the free life, the need to survive, and strengthened by struggle – would be able to contain each other and live without government.

Communism, on the other hand, even if it is not authoritarian and Marxist, but libertarian and Kropotkinist, would be a society in which the legislative and executive power would be exercised either by acephalous mass assemblies (Populism) or by delegates elected by the masses (democracy). Both would mean that the individual would always be governed by the many. And this would be a government worse than any other, whether by one or a few, because the mass is stupid, ferocious, tyrannical, and worse than the lowest individual.

How could libertarian communism be brought about? It could be by means of absolute conformism to the industrial-machinist society that man has already achieved. This would reduce all to a mechanical equality, feeling, thinking, and acting identically – in this way making control and repression by the State unnecessary. Then there would be a standardized anarchy.

Or it could be by means of a new organization: individuals united by categories into federations, the federations into communes, the communes into regions, the regions into nations, the nations into the International. At the head of each a directive council invested with the authority and power to make itself respected by any individual dissenting from the decision of the majority. Hence, a State that would not call itself a State, but would be one nonetheless complete with a hierarchy, laws, and police.

And also with prisons. Malatesta wrote in his essay “Anarchy” that prison-hospitals would exist in which delinquents, considered as insane, would be “confined and cured”.

I remember that in a polemic I had with him in Umanita Nova in 1922, he wrote: “Martucci, in the name of the sacred rights of the individual, does not want that there remains the possibility of harming a ferocious assassin or a ravisher of children.”

I replied that the assassin and the ravisher could be left free in a remote district or on an uninhabited island, but not made to suffer imprisonment which would be un-anarchist. In my book The Banner of the Anti-Christ, I wrote:

The pretense of curing, rectifying, or correcting is extremely odious because it compels an individual who wants to remain as he is to become what he is not and does not want to be.

Take a type like Octave Mirbeau’s Clara (see his Garden of Torture), tell her that she must undergo a cure to destroy her perverse and abnormal tendencies which are a danger to herself and to others. Clara would replay that she does not want to be cured, that she intends to stay as she is, risking every danger, because the satisfaction of her erotic desires, excited by the smell of blood and the sight of cruelty, gives her a satisfaction so acute, and emotion so strong, which would be impossible if she was changed into a normal woman and restricted to the usual insipid lusts.

Nor are normal individuals basically good, as libertarian communists like to believe. Man by nature is a skinful of diverse instincts and opposing tendencies, both good and bad, and such he will remain in any kind of environment or society.

Libertarian communism is no more than a system of federalism and like all social systems would oppress the individual with moral and judicial restraints. Only the superficiality of a Proudhon could give such a system the name of “anarchy” which, on the contrary, means the negation of all government by ideas or by men.

Anarchists are opposed to authority both from below and from above. They do not demand power for the masses, but seek to destroy all power and to decompose these masses into individuals who are masters of their own lives. Therefore anarchists are the most decisive enemies of all types of communism and those who profess to be communists or socialist cannot possibly be anarchists.

Anarchy is the aggregation of innumerable and varied forms of life lived in solitude or in free association . It is the totality of experiences of individual anarchists trying to find new ways of non-gregarious living. It is the contemporary and polychromatic presence of every diverse mode of realization used by free individuals capable of defending their own. It is the spontaneous development of natural beings.

In it one will find that everything is equivalence and equilibrium: conflict and agreement, the brute and the genius, the solitary and the promiscuous – all will have the same value. One can designate opposites with the same word: “altus” can be top or bottom, height or depth.

In substance anarchy would mean the victory of polymorphism, which is opposed to the monism of all social systems, including libertarian communism.

Some maintain that in the absence of government or law we would have to complete triumph of bellum omnium contra omnos: the war of each against all. They are mistaken.

In a free world there would always be struggle, which is indestructible because it is natural. But it would be a struggle between the approximately equal forces of men strengthened by naturalism.

During a long polemic he had with me between 1948 and 1950, Mario Mariani tried to demonstrate that in a condition of anarchy war among man would increase: “If today a man has no fear of attacking his fellow and the policeman who stands behind him, he will certainly have no fear if I eliminate the policeman. Algebraically speaking, if A has no fear of B despite C, he will have even less fear if B is alone.”

My reply was: Today A has no fear of B despite C because he knows that both lack decision and force. B relinquishes them because he relies on C to defend him. And C protects him not because he has any lively feeling or strong interest, but only because it is his trade. Therefore he does not inspire much fear. Hundreds of police in Paris failed to capture Jules Bonnot, the illegalist, alive and had to launch an attack on his house in order to kill him. It is true that behind this protection there is the apparatus of social repression with formidable means at its disposal, but today’s delinquent underrates the collective’s organization and always hopes to escape it or avoid detection.

Again, if A finds B as resolute as he, then their forces will be equivalent. The case is clear and does not allow illusion. At that moment, the dispute between them will be resolved.

Anarchy, then, is neither continual warfare which would weary everyone, nor social harmony which would weaken everyone if it were possible (which it is not, due to the diversity of individual types and their conflicting needs and aspirations).

If history is not an infinite process, as I firmly believe, than when it exhausts its cycle it will disappear opening the way to anarchy.

If, on the other hand, history endures, then anarchism will remain – that is, eternal revolt of the individual against a stifling society. Thus proving the immortality of that “tendency to chaos” that the lawyer d’Anto finds so deplorable, but which is to me worthy of every praise.

Between association and organization there is the same difference as between a free union and marriage. The first I can dissolve when I wish, the second I cannot dissolve or dissolve only under conditions and with certain permissions.

It is not by organizing into parties and syndicates that one struggles for anarchy, nor by mass action which, as has been shown, overthrows one barracks only to create another. It is by the revolt of individuals alone or in small groups, who oppose society, impede its functioning and cause its disintegration.

Translated from the Italian by Stephen Marletta