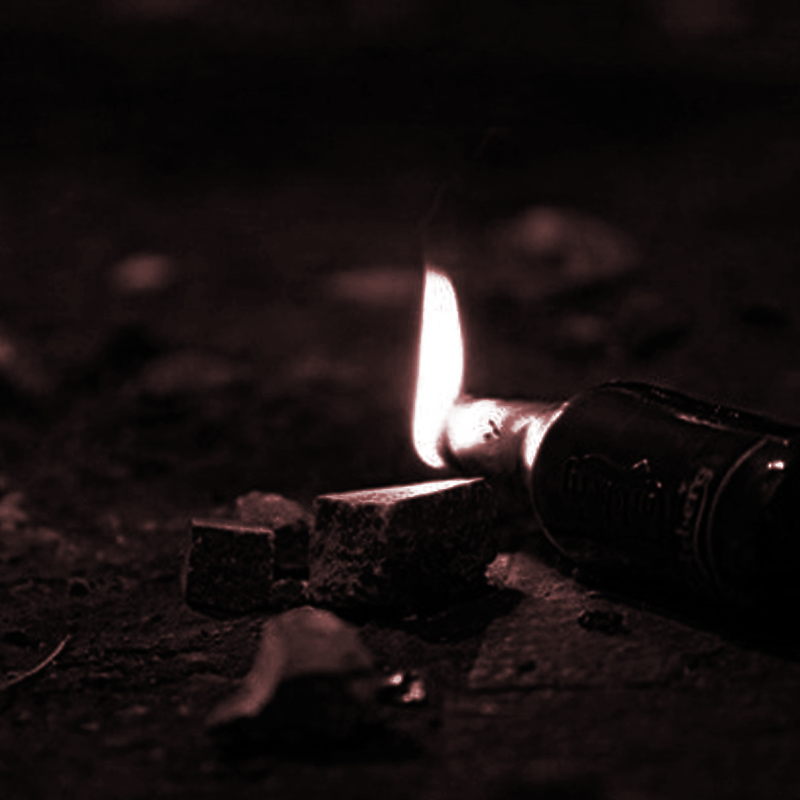 These pages are for the deranged, individuals not submerged in habit, regimented by protocol or banalised by identity, who refuse to be controlled, ‘facilitated’ or herded into numerically-oriented deadlines. They want to encounter those who can still raise their voices and howl with joy in a subdued world where the ironic smirk of the all-knowing has replaced the wink of complicity and laughter has dissolved into a kind of hiccough, a punctuation mark to round off the glib remarks of the eternally detached. They would like to meet those who combine destructive tension with wisdom, and, armed with creative devilry, venture into the poisoned jungle of capital to hack it down and let life surge forth.

The deranged are neither dumbed down by habit nor blinded by the ‘greatest show on earth’. Rather than run around for a cause to support they are fighting their own cause, egoistically conquering moments of freedom, subverting and attacking the existent with all means, knowing that Chaos is life and that Reason continues to generate monsters.

The authoritarian organisations of attack in the not too distant past were products of Reason, but they didn’t get the chance to put their ultimate goal of managing power into effect. These structures have seen their day and old schema have given way to flexible projects of social control. It is precisely in this terrain that recycled Marxists and certain anarchists/libertarians are finding common ground, to the point that you can be an anarchist one day, a post-marxist the next and if the stomach resists, mutate into an indigestible hybrid. The anarchist aesthetic is more appealing, but the radical left have so many fascinating theories… The labyrinthine tomes of these aspirants-to-power-turned-cohabitants-with-the-existent are more seductive these days, their workerist verbiage now extinct along with the proletariat.

Social control is becoming self-control: large numbers released from the prison/factories and mines of western Europe—thanks to neo-slavery and digital technology these now function (almost) perfectly on the other side of the planet—require order from within and the suppression of individual tensions. This has led to the development of an ‘anti-authoritarian’ practice and a ‘non-hierarchical’ politically correct language that has been generally accepted regardless of ideology, which has taken a back seat. The internalised fear of a raised voice, someone speaking out of turn, the intrusion of an idea or critique into the smooth machinery of dissenting consensus is turning thousands of people into bored and boring participants in the same old designs of the same old minorities concealed behind the wall of resigned participation that can even embrace aspects of well choreographed street ‘violence’ or neighbourhood initiatives. There has hardly ever been a conscious decision to experiment some of the insurrectionalist methods that have appeared in embryon in the struggle in recent decades. These have rarely been taken up and addressed in deliberate attempts to provoke rebellion, preferring to subjugate anarchy to alliances with the leftist forces—that welcome them with open arms, of course—pouring all their creative/destructive potential into the dead end of patching things up.

Beyond all that, there is an elsewhere that is almost tangible but continues to elude us. It is dissipating into thin air, leaving a dissolute state of ennui tainting rebel visions and dreams. We have done it all, seen everything before. Stormed the heavens. Entered the prison gates and come out again, relatively unscathed. ‘The movement is at a low ebb’. ‘We need new ideas, new methods to transport us into the field of battle once again.’

In spite of that, attacks on capital and the State by individual and small groups of anarchists have been practically the only ones perceptible alongside the huge spontaneous revolts that have shaken the ground almost everywhere on the planet in the recent past. And this anarchist attack has not just been addressed at the structures of power but also against the enemy within, both in the form of citizen/snitches and a stagnant movement whose only strength is addressed at attempts to denigrate or recuperate the rebels, the uncontrollables.

However, the anarchist movement as a whole cannot be seen as a privileged point of reference for the necessary destruction of the existent. If the (apparently) floundering capitalists were to throw out buoys to those gasping to stay alive in the deadly seas of economic megalomania, how many anarchists would be among the first to reach out to grab one? What better than a bunch of organisationally obsessed anti-authoritarians to (self) manage the new wild capitalism’s eternal swindle of ‘fixing things’, now that formal authority is out of fashion and the politician has moved from inveterate clown to obsolete clone?

That is why the time to attack is now. There is nothing and no one to wait for. To act now, with determined projectuality where our destructive tension is the defining factor in our lives, not something that appears every now and again out of the blue. In the era of ‘use and discard’, flexibility, snap decisions and about-turns, there is little desire to think things through, discuss strategies and methods, identify an intermediate target and act towards the destructive culmination of the attack.

The production of trivia has led to a trivialised world. Some of what loosely defines itself the anarchist movement has fused with the urban subculture, dissipating tensions into a social whirl of benefit gigs and various forms of anaesthetic from music to ‘soft’ substances to dull the pain.

For those in the logic of a horizontal attack on the workings of power (which are complex and always in a desperate battle to maintain equilibrium and consensus) on the other hand, the objectives are specific, they do not have ‘revolutionary’ connotations but insurrectional ones. A few comrades, an analysis of the objective in question, simple means of communication, a minimal organisational proposal and above all the decision to see the experiment through to its destructive climax. An informal insurrectionalist movement is above all a methodology of self-organised attack, not a fixed organisation. It does not require numbers in order to exist. A few comrades might enter relations of affinity and decide to move against a particular objective, in an insurrectionalist intermediate struggle. But they are not acting in a vacuum, they wish to stimulate conscious rebellion by the exploited, not just wait for the next riot to explode. Not desiring to increase in number as a group, they propose the creation of minimal self-organised formations that could multiply and widen into a generalised attack on the existent at any moment, but don’t have to wait for this before attacking themselves.

An informally organised projectuality of destructive action directed against class enemies or their structures refuses mediation, delegation or negotiation. It can have NO COMMON GROUND with political parties, unions or any other fixed political or armed structures, as these are antithetical to and enemies of freedom. The concept of alliances or a common struggle is absurd. Parallel lines never meet. If they do, one or other has lost its essence. Anarchists who end up making political alliances in the illusion of numerical strength are traitors: of themselves and what they say they stand for and of the rebels they had enchanted with their cries of freedom, to become nothing more than witless allies of the boss class.

Time is running out.. We must rescue our anger, our bad passions, from the swamp of tolerance and political correctness, focus our hearts and minds on the great challenge that is bidding us, break out and encounter our future comrades and accomplices, the exploited, the angry ones, the rebels. They are all around us but will remain invisible like ourselves until we come out into the open with unequivocal words and above all, actions.

The workings of capital are there to be found if we look for them, far from the propagandistic fausse pistes and staged ego-trips of trumped up puppets and showmen. Most of the materials necessary for attack are available on the shelves of the supermarkets and are simple household objects waiting to be appropriated. The rest, the ‘hardware’, the accomplices, the solidarity, will come forth from the reality of the struggle itself and the new paths it reveals.

Written as an introduction to the unpublished magazine, “Deranged 00” and later published as a postscript to Tame Words from a Wild Heart (Jean Weir, Elephant Editions, 2016)